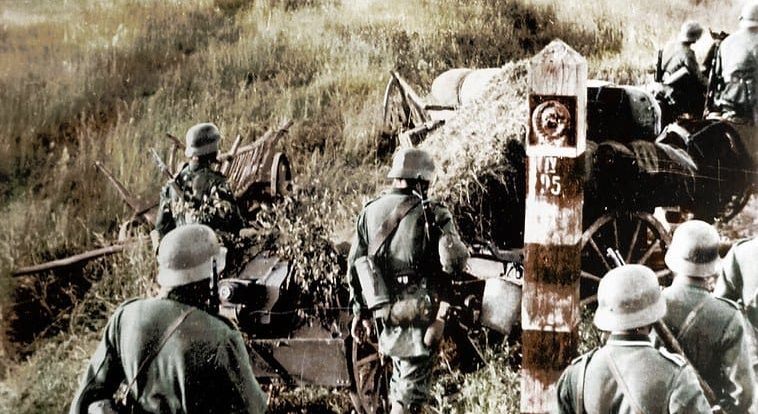 The Nazi-Soviet War was the largest land war ever fought, and the results shaped world affairs even to the present day. The German invasion of the USSR in 1941 – Operation Barbarossa – is therefore among the most important campaigns in history.

Let’s look at Barbarossa and examine the causes for German failure, and hopefully get a little deeper than tired old clichés about the Russian winter. It wasn’t snow that destroyed the Wehrmacht – it was the Red Army. Let’s see how it happened.

To start off, let’s address an obvious question: how did Germany manage to surprise the Soviets with an invasion of over 3 million men? You can hardly disguise such an enormous buildup, after all. Let’s try to parse out this issue – undoubtedly one of Stalin’s worst mistakes.

Stalin was fully aware that the Wehrmacht was massing on his borders. What he didn’t know was 1) whether they intended to invade, or 2) what the date might be. Previously, Hitler made demands and threats before attacking, and Stalin was convinced he’d do so again.

Stalin knew a war was coming – he said so on several occasions – but he believed there would be a period of diplomatic standoff first. He did not expect a sudden, unannounced attack, so the Red Army – although deployed on the border – was not on high alert on June 22 1941.

The result was that the Germans achieved tactical, but not strategic surprise. Stalin wasn’t surprised in principle – it was the timing of the attack that wrongfooted the Red Army. What he did not understand was just how deadly such tactical surprise could be.

The Wehrmacht roared off the start lines and almost instantly punched through the Red Army’s front lines. 152 divisions were on the move – 3 million troops, with 3,400 tanks, over 7,000 artillery pieces, and more than 2,500 aircraft. The largest invasion force in history.

The Wehrmacht deployed a huge force, but the Red Army actually had near equivalence in every weapons arm. The problem wasn’t numbers, it was that the Red Army was completely unprepared for the speed and operational precision of the war. Encirclements quickly began to form.

While the Red Army had material strength, the command and control was overwhelmed. The Red Army lacked a dedicated wireless communications system and had to rely on communist party comms. Officers were overpromoted due to Stalin’s purges, and were scared to take initiative.

The Germans quickly destroyed Soviet advance airfields – by June 24 (2 days into the war) Stalin was informed that the enemy had “complete air dominance.” But the success of the German advance on the ground was even more astonishing.

Erich von Manstein drove his Panzer Corps 185 miles in only four days. In the Center, Heinz Guderian covered 270 miles in the first week; in the North, one advance Panzer formation covered half the distance to Leningrad in five days. This was an unbelievable pace of advance.

The speed and precision of the German advance left virtually all the Red Army frontline units encircled and disoriented, and casualties began to stack up. By August, the Germans had taken 900,000 prisoners. By October, losses swelled to 3 million men and 15,000 vehicles.

This was a staggering level of loss that no army in the world could be expected to survive. Franz Halder, at German high command, famously wrote in his diary that “It is thus probably no overstatement to say that the Russian campaign has been won in the space of two weeks.”

But something was wrong. Soviet forces were being destroyed in whole divisions – even whole army groups. And yet the Red Army was still in the field, everywhere, fighting hard. Their front was intact – there was no general collapse. What on earth was going on?

The USSR had a depth of defense that remained invisible to the Germans, in the form of a huge number of trained reservists. By the end of June alone, five million reservists had already been mobilized in the rear areas, and many more were on the way.

German planners had gamed out a scenario where the Red Army could mobilize 40 reserve divisions in 1941. This was one of the great intelligence misfires of all time.

In early August, Hitler was informed that “The number of new units being organized may have reached its peak. The creation of more new units is hardly to be expected.” Truly famous last words, as the Wehrmacht drove ever deeper into a catastrophe.

Halder, after gloating in June, would say “It is clearer and clearer that we have underestimated the Russian colossus… At the start of the war, we reckoned on some 200 enemy divisions. Now we have already counted 360.”

He continued: “These divisions are definitely not armed and equipped in our sense, and tactically they are in many ways badly led. But there they are. If we destroy a dozen, the Russians put another dozen in their place.”

Reality was beginning to set in.

The other problem was that, despite operational incompetence, the rank and file of the Red Army fought fiercely, and German casualties began to add up. One German commander quipped that they needed to reduce their loss rates “if we do not intend to win ourselves to death.”

German advances looked amazing on the map – but their forces were getting badly chewed up. One General would write to his wife: “The Russian is very strong… All past campaigns seem like child’s play in comparison with the present war. Our losses are heavy…”

A key inflection point came at the Battle of Smolensk – a battle that should be famous, but isn’t. The Germans advanced on Smolensk in early July, expecting only partial Red Army forces defending. Instead, they found five fresh Soviet field armies deployed on the approach.

The Wehrmacht successfully encircled these forces, and then found themselves hit by counterattacks from seven additional armies! Instead of shattered, partial units, the Red Army fought for Smolensk with twelve field armies, totaling nearly a million men.

The Germans won the fight for Smolensk, but the battle took two months to resolve, and cost them over 100,000 casualties. This was not the battle they expected, and the presence of these huge Soviet forces came as a total shock, costing them both time and lives.

Field Marshall Bock, the commander of Army Group Center, would at this point write (somewhat pathetically) in his diary, that “If, after all the successes, the campaign in the east now trickles away…. it is not my fault.”

The campaign was now lost for the Germans. By the start of October, their forces were heavily attrited and had failed in their stated objective of destroying the Red Army. They were now out of time before the autumn mud clogged the roads and slowed their advance to a crawl.

The Red Army had suffered catastrophic casualties, but the unflinching power of the Soviet state was on full display – calmly mobilizing millions of young men and throwing them in the field, wearing the German war machine down to a stump.

Germany famously made a winter push for Moscow, but this was never truly viable given the state of their forces. Bock would complain: “How a new operation is to start from this position with the slowly falling combat value of the troops, I don’t quite know yet.”

The Wehrmacht was being de-modernized. 50% if the Panzers were kaput; and motor transport was wrecked. The Wehrmacht lost 200,000 trucks during the summer – to replace them, Hitler signed off on a replenishment batch of a mere 3,500 vehicles.

When the Germans finally ground to a halt outside Moscow in early December, the Wehrmacht was a fought out, blunted force – but it was the Red Army, not the cold that did this. At the cost of oceans of blood, they had ground the mighty Wehrmacht down to a shadow of itself.

The Germans were not stopped at Moscow because of the cold; they were cold because they’d been stopped. A miserable winter was the punishment for their failure, not the cause of it. German officers had been sounding the alarm about casualties long before the winter came.

The first week of December 1941 was a pivot of history. On December 5, Zhukov realized the Germans were exhausted, and launched a massive counteroffensive at the gates of Moscow. A few days later, a Japanese strike force bombed the American naval base at Pearl Harbor.

There was nothing operationally to be done for Germany to win the war. They lost the war when they invaded the Soviet Union without any sort of remotely realistic intelligence about Soviet mobilization capacity, and again when they failed to adapt or change course in July.

Then, as now, Russia’s greatest defense was not the winter, but the fortitude and resilience of her people. In 1941, the attrited the best army in the world and destroyed its fighting power at the cost of millions of lives.

One American journalist in Moscow recalled trying to tell the story with one bold, thrilling phrase: “While I was watching the Germans occupy Paris, the best I could do was: “Paris fell like a lady.” Now, the best I could find was: “Moscow stood up and fought like a man.”